“Every counsellor and psychotherapist – every person who cares, and wants to understand the strivings of the human heart – should read this book!”                    Fintan MacGall

This book has now been renamed, split into two volumes, and the first volume is now on sale. Here are the details:

Freud, Mammy and Me

The roots and branches of a simple country boy

Volume 1 of the fictionalized autobiography of Daniel O’Beeve 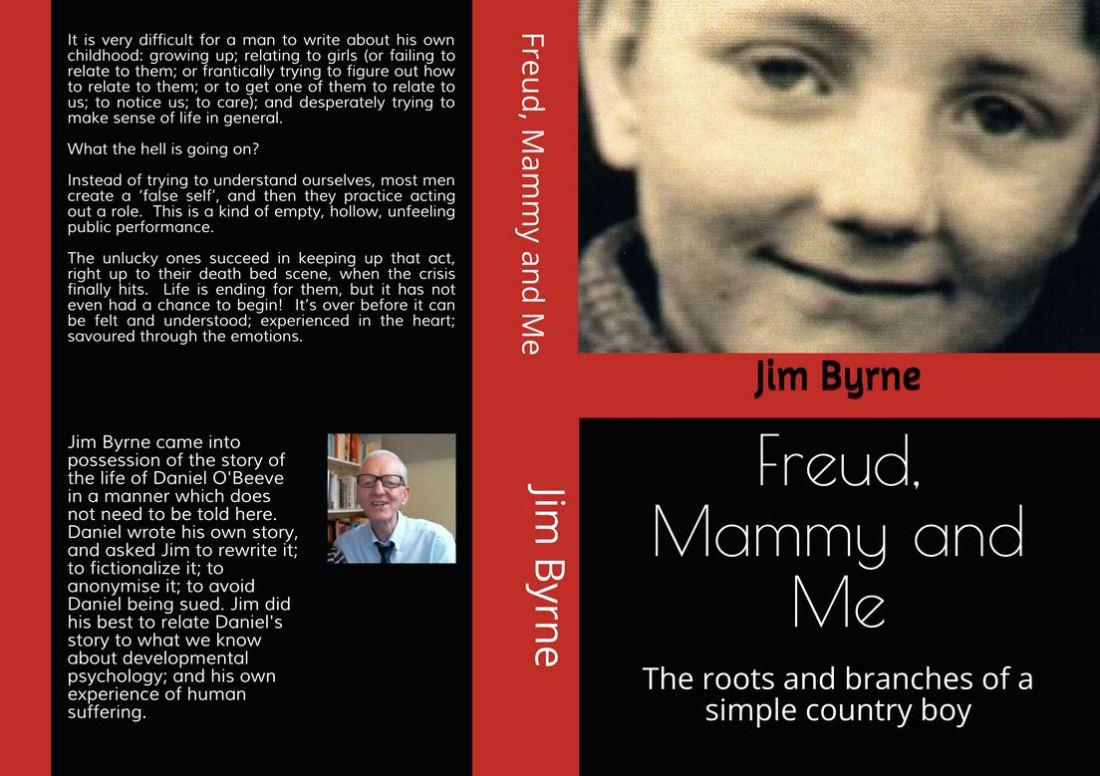 “I was just a little piece of irrelevant history.  A small fragment of unimportant story. Collateral damage of the viciousness of the class war. Nobody cared whether I lived or died. My story was not appealing, and nobody wanted to read it. The very idea that I would offer my story to the world met with a wail of contemptuous incredulity”.

Daniel O’Beeve, from a letter to Mickey J. Moran

Daniel O’Beeve was a child for the dump. A child to be thrown away – wasted on a life of servitude to the shabby God of the Irish Catholic Church of the nineteen-forties and ‘fifties; and to employers who needed unthinking wage slaves.

To prepare him for this ‘role’ – this discarding – his parents were perfect: two servile, psychologically damaged individuals with minimal education and no conception of love or kindness, for themselves, for each other, or for their children.

His birth was painful, for him and his mother, and she swore she would never forgive him; rejected him at birth; and made him suffer for years, in retaliation for her torn-ness.

His childhood was testimony to the ubiquitousness of cruelty and ignorance in his culture, which, strictly speaking, was a cultureless-culture-shell.

If he’d been taken to see a psychologist at the age of seven years, the assessment would have shown that he was suffering from an anxiety neurosis, linked to physical and verbal abuse; that he was autistic; and switched off from normal emotional processing of his social environment.

On the other hand, to their discomfort, some people saw in him a kind of detachment from the social status of his family of origin. A kind of alien intelligence, which looked in horror at the mess that was his social environment.

He once had a dream in which he climbed over the high stone wall of the prison in which he was incarcerated, and found, outside, a field of yellow buttercups, glinting in the rays of warm, yellow sunshine, which bathed him from a clear blue sky.

For a few moments he stood in the calm, peaceful stillness of a wonderful, spiritual day.  And then it was gone, and he was back in the cold darkness of his normal life.

He wanted to get to that field again.  But how could he ever hope to get there?  After all, he had no map to help him find the wall again. And he had internalized the harsh injunction which denied him the right to climb the lowest of walls, in case he scuffed the toecaps of his little, second-hand shoes.

This is the story of a boy who should never have achieved consciousness, of himself or his surroundings, because of the traumatic nature of his early family and school life.

The story follows him through his painful, stumbling steps towards consciousness; but he then has to somehow make up for eighteen years of social-emotional deprivation. That would take him, at a conservative estimate, a further eighteen years.

This is the story of a brave coward…

A ‘basket case’ who ardently, but mainly blindly, sought escape from the basket!

“The truth will set you free”.

I had a strange dream last night. I was in a TV studio, and I was feeling dreadful – with a kind of sick feeling in my heart, lungs and guts.  And dreadful ‘emotional sensations’ for which I had no names.  I had no words to describe or understand the entire experience.

Nearby, I was aware that Claudia Winkleman, a young, dark-haired, British TV presenter, was setting up a row of cup-cakes to display to the camera, and, presumably, to a national TV audience. I was unclear as to whether the TV viewers could see me, standing there, like a lost child, shoulders drooping, and eyes downcast.

I was standing within yards of Claudia, but she felt totally remote from me – inaccessible.  I felt rejected and alone: like I used to feel as a teenager; and perhaps earlier, in the first years of my life. Claudia was too busy preparing food to display on TV to even notice little me.

When I awoke, I still felt sick in my stomach.

Now, I sit at the table and try to write about this dream, in my journal.  What the hell does it mean?

I think it’s about my mother and me, when I was a little boy.  That’s my gut feeling.

For more, please click this link: Freud, Mammy and Me…***