Available from Amazon outlets, as a paperback and an eBook…

The limits of human flexibility in a cruel world – and how to protect, defend and strengthen yourself

Finding the Golden Mean that leads to strength and viable flexibility, in order to be happy, healthy and realistically successful

With contributed chapters by Renata Taylor-Byrne

The Institute for E-CENT Publications: 2020

Waking up to a challenging reality

At the age of thirty-four years, I woke up, for the first time.  I became aware of the fact that I was living a life that didn’t really work for me – which had never really worked in a remotely satisfactory way.

When I say it had never really worked, you might misunderstand, and think my life lacked excitement; but that is not what I mean at all.  I had lived and worked in Bangladesh and Thailand; been to college; been a radical politician; edited a political journal and an alternative newspaper; had three relationships with women; published two books and several significant reports; travelled across Europe on military service; and much more besides.  But none of this meant anything to me.  None of this had any real, emotional significance.

“The valley is empty now.

Nothing moves on the streets.

And every kind of dog.

I always hate to see it this way,

Which is all the time!” 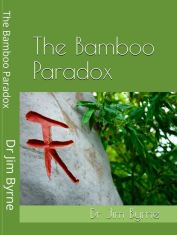 I was depressed by the emptiness of my full life!

At that point, I began to seek wisdom – to examine my life – and to explore ideas about better ways of living a more meaningful, purposeful, more satisfying life.

Around this time, I came across Thoreau’s quotation which claims that: “Most men lead lives of quiet desperation”.

That felt like a profound truth, but it does not help us to know what to do about it.

Perhaps you can relate to this situation.

Perhaps your own life does not really work for you, in a fully satisfactory way.

And perhaps it’s time to find out why; and what you could do about it.

In this book, I want to share some of the fruits of waking up, and taking responsibility for the direction of my life.  What I will tell you about is my journey – shared with my wonderful wife, Renata Taylor-Byrne (who I hardly knew at the point at which I woke up).  This was a journey towards wisdom and happiness; physical and mental health; and emotional well-being.

Of course, I had little idea what ‘wisdom’ meant at that time.  I knew the word.  Perhaps my thoughts about wisdom went something like this, at that time:

Wisdom may be assumed to be about distinguishing fact from fantasy; though I know how difficult that can be. It should be about being realistic, or practical and logical about life and what it is possible to gain from living well. But it also probably entails knowing where to look, and how to value what we see.  (At the age of 34 years I had limited capacity to do any of this).

I also sensed that I had often been foolish in the things I’d said and done; the things I got involved in; and the people I’d allowed to influence me.

I was not good at accepting myself as I was; and often criticized myself for my apparent failings; especially in failing to make enough money for a comfortable life; or to have a group of friends.  But I was good at keeping calm.  Perhaps, sometimes, I was calm when I should have been angry; but I was often afraid to be angry.

I was aware of the inner conflict in all humans between the desire to be a good, moral individual, and the desire for the fruits of evil (which involve harming others).  And I had mainly been able to avoid my evil or immoral urges.

I did not have a developed capacity to laugh and have fun; and I over-worked (because, as I discovered very much later, I am ‘a Responsible Workaholic’)[1].  I was overly serious; too upset about the mad, unequal world into which I’d been thrown at birth.

And I was not good at feeling grateful for what I actually had in my life; and the many exotic journeys I’d been on.

I was aware of the value of being ‘gentlemanly’ or polite in my dealings with others, to facilitate the smooth running of social encounters. But I was not self-assertive enough.

I was aware of my limitations as a human and a man; but I had not yet reached the stage of being able to accept my inefficiencies and ineffective behaviours; or my poor general judgements.

I did not often engage in foolish anger; but I did not recognize that I was entitled to take up a full square on the chessboard of life.  I tended to live in the cracks between the lives of others.

I had been raised to be very stoical; to ‘carry my (Catholic) cross willingly’; to ‘turn the other cheek’ to insults and injury; to ‘roll with the punches’; to ignore the ‘arrows of adversity’; and so on.

I had mismanaged my first marriage; and did not (during that six year marriage) wake up to the fact that I had no idea how to have a happy relationship – mainly because I came from a family in which my mother and father had an arranged marriage; and they never learned to love each other; and their only love for their children was one driven by duty, and not affection. (Of course, it took years for me to understand this aspect of my start point in life!)

Get your paperback copy today, from one of the following Amazon outlets:

Or you can buy a Kindle eBook version of this book from one of the following Amazon outlets: